In Cakes and Desserts, Coffee

Over the weekend I have been over indulging on scones, scones, more scones and the occasional pumpkin cookie. Despite all this I have not disgusted myself quite enough to stop from it altogether. An emergency plan is needed, I need to trick my own brain! 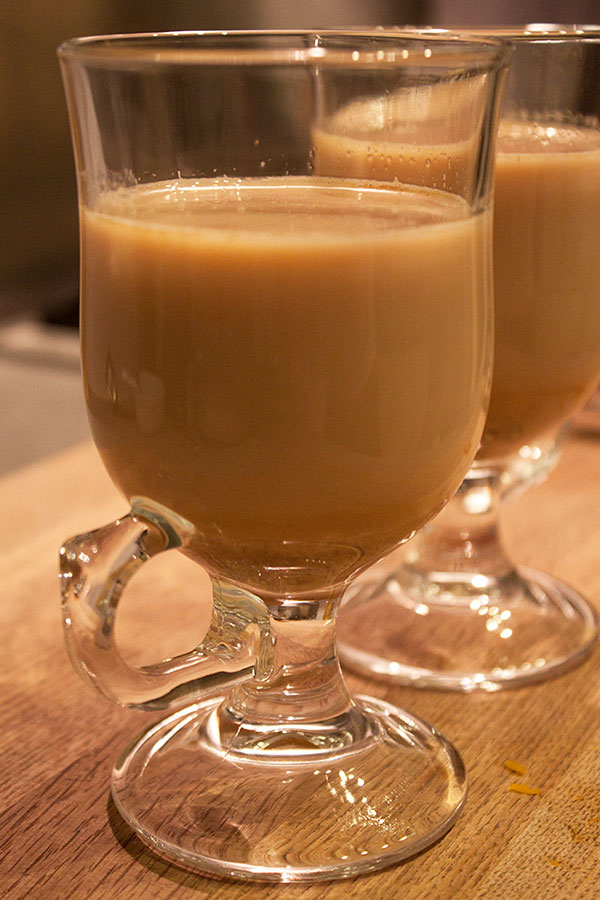 I need something that tastes scrumptious, autumnal, indulgent and cosy, but doesn’t do so by piling on the calories. With this goal and left over pumpkin puree from yesterday tonight I made and tasted my first Pumpkin Spiced Latte.

And yes it was everything I hoped it would be.

I am not saying that it wouldn’t be even better topped with thickly whipped cream topped with shavings of dark chocolate and a tiny smattering of cinnamon, because then I would be lying.

But for a Monday night this was a gentle, warming and comforting coffee.

Based on this slow-cooker recipe. It’s not often that I avoid my slow-cooker, but tonight I needed something quick, so this is a stove-top latte.

Neither me or the Other Half like really milky coffees so this amount of milk was perfect for us, if you are using espresso or like very milky lattes you can double the quantities of milk, sugar and pumpkin.

Put the milk, sugar, pumpkin puree and spices in a pan over a medium heat.

Heat until starting to boil, then put on a low simmer, stirring quite often.

Put the coffee on, I don’t have an espresso machine, so I just made enough for two small cups of filter coffee.

Pour the coffee into cups and then add the milk. Top with a little sprinkled cinnamon.

For another healthy type of treat take leftover pumpkin seeds, wash the pulp off, add a tablespoon of brown sugar and a little ground cinnamon. Put in warm oven till they start to go golden. I have been nibbling on these for two days now, crunchy, sweet and healthy.

What satisfying but healthy treats keep you going when the weather gets cold and the sun disappears early?

Meatballs in Tomato and Garlic Sauce